An unlikely bond forms between an underground debt collector and a cai luong “Vietnamese opera” performer against the backdrop of Saigon in the 90s. Set in 1980s Saigon, well before the U.S. embargo on Vietnam was lifted in 1994, SONG LANG depicts a gritty underworld whose only source of brightness comes from the gorgeous stage productions of a local opera troupe. A hunky, brooding debt collector forms an unlikely friendship with the charismatic lead actor of the struggling company, and their friendship, to their surprise, awakens feelings in both men. “Song Lang” is a percussion instrument used to control tempo and phrasing in Vietnamese modern folk opera. In the Vietnamese language, it also means “two men.” It is the perfect homonym for a nearly perfect film. 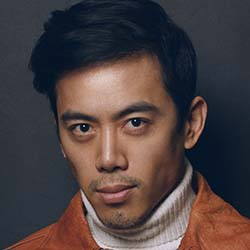 Writer/Director/Actor Leon Le was born in Vietnam and grew up there until the age of 13 when he moved with his family to Southern California. After college he pursued his dream of being on stage by moving to New York City to begin a career in Musical Theater. After establishing himself as an accomplished Actor/Dancer/Singer, including Broadway, film and TV as well as acting roles in TV series and feature films in Vietnam, he began pursuing another life long dream, writing and directing. His multiple award winning short film Dawn (2012) that he wrote and directed won critical acclaim and screened at over 30 film festivals worldwide garnering such awards as Excellence in Fiction Short Filmmaking Award (AAIFF), Best Short Film (VIFFl), Best LGBT Short Film (YXINEFF), Best International Short Film (YXINEFF), Best Director (YXINEFF), Best Editing (AOFF), Best Ensemble Cast (AOFF) and a nomination for the Iris Prize Festival Award in Wales. Proving his exceptional and visionary talent as a Writer/Director, his short film Talking to My Mother (2014) started it’s festival run in 2015 and has already won awards including Best Drama, Best Director, Best Actor and Best Original Score at Asians on Film Festival, Best Short Film at the Viet Film Fest, and Best LGBT Short and Audience Choice Award at YXINEFF.