A wedding. A girl. A closet.

And the choice to be made once and for all – against the current or against herself. 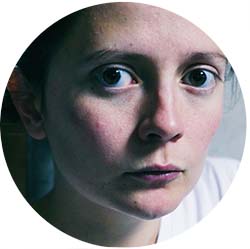 Slava began her career at 16 as the lead in the Bulgarian film Christmas Tree Upside Down (Karlovy Vary Jury Prize, 2006). Her next part in Crayfish (2009) brought her the Best Supporting Actress Award by the Bulgarian Film Academy. In 2014, Slava completed a MA in Directing at the London Film School, where she made several award-winning shorts. Since 2015, she is the artistic director of Sofia Pride Film Festival, the biggest LGBTQ+ art event in Bulgaria. Alumna of the Sarajevo Talents, Berlinale Talents and Short Film Station, GoEast Talent Lab and the Locarno Filmmaker’s Academy.