If Only You Were Mine

Dominik is a young graduate experiencing his first relationship. Adam becomes a mentor, idol and first love for him. With great feeling, there are also great uncertainties. He finds out that he doen’t belong to his world of young Bratislava, but he still tries to make their relationship work… 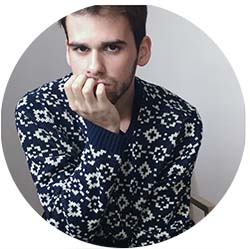 He graduated from Vocational high school of printing, studying digital media. He became interested in film editing and directing. In 2015 he got accepted to study Film and Television Directing at the Academy of Performing Ards, where he is currently in masters degree. His short movies are dedicated to difficulties of young people and LGBT community.