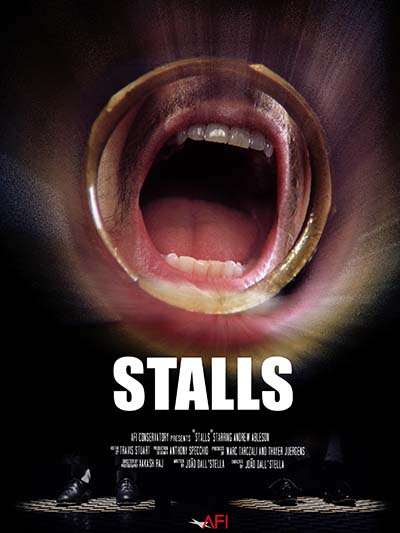 Jonathan goes to the restroom in the middle of an opera performance. He has a very specific mission. He takes off his marriage ring and opens the secret golden glory hole hidden inside one of the stalls. Now, he waits for someone to come in so he can be on his knees. His heart accelerates as each new guy comes into the restroom. Finally, after taping his feet in what looks like a tap-dancing sequence he is able to find another man willing to give him what he wants.

João Dall’Stella just graduated as a directing fellow from the renowned American Film Institute Conservatory in Los Angeles. He was born in Sao Paulo, Brazil. He is a queer writer and director who wants to share his personal stories with the world but with a twist, he also loves writing genre films. His mission is to bring LGBTQ+ characters to the forefront of mainstream movies and his dream is to direct the first gay superhero film. His favorites places to shoot films are bathrooms, bathhouses, and nightclubs. Right now he currently looking for funding for his queer horror/slasher feature film. His recent short film “Q-Therapy” was part of the official selection of OUTFEST 2019 and his latest film short film “STALLS” is currently doing the festival circuit. He has also worked on multiple film roles on sets to acquire experience to direct his films while living in Sao Paulo, Stockholm, and London. Outside of film he is also a musician and writes and composes his own music. More info at www.joaodallstella.com