An old picture book writer named Yamazaki, having been handsome as a young gay man, grows narcissistic of his beauty. But now, can’t bear his own aging. One night, Yamazaki meets a young and beautiful man named Leo. Yamazaki collapses during an S&M session with Leo, and reveals his agony. 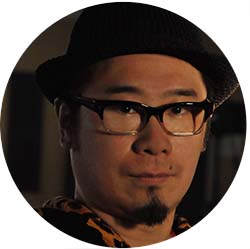 He started his career when he was in Musashino Art University student. His early work “Lost in the Garden” is exhibited in “Tokyo International Lesbian and Gay Film Festival” and won the Special Jury Award in 1995. After that, he directed many works in wide genre, from independent to commercial film. ”Kenka Bancho the movie series” (2008-2011) “The OneeChanbara Vortex” (2009) which is both from famous game titles. He also active as a VFX professional.