Elena, a young pianist who loves music, meets someone who´s about to change the score of her life. She gets a very original and beautiful present for her anniversary. This is a story about a journey of unique and unforgettable emotions that will make you feel that your life can change when you less expect it. Two different paths… two soul mates… 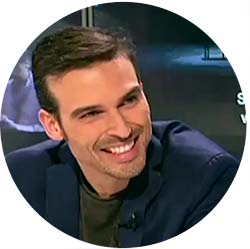 Martin Crespo, a director, screenwriter and actor born in Malaga (South Spain) winner of several awards throughout his career. At the age of 18 he moved to the city where he would train to be an actor and to learn filmmaking, in where he did some advertising work. For personal reasons he had to move back to his hometown, but years later he goes back to his real vocation. In 2005 he goes to acting classes and also write screenplays. After some works, like “Destiny´s Game” or “DYC8 (Diego & Carlos)”, he directs and produces “Sin Love”, signed as “Rossmartin Films PC”, union between her currently partner and Martin Crespo. He received several awards and accolades for the short film “Sin Love” in nationals and internationals festivals and this short film was use to do solidarity events like show of solidarity against the gender violence and homophobia, directed by the movie´s director and Malaga Delegation. This short film is required to provide educational classes in some colleges of the city. For all these reasons, the director and screenwriter develops the feature script called “Ticket to Happiness”. He´s working in that production actually. After that, he established with his partner Rosalinda Muniz, the films production company “ROSSMARTIN FILMS PC., S.L.”, so they start working professionally as a company, directing the short film “Cheeky” just released and nominated in several nationals and internationals Festivals, and award winning of Best Short Film. He produce and he made the direction his screenplay “Ethereal”. In summer of this year, the director moves to London to learn English language and to increase knowledge about cinema where he estudies in Raindance Film School and he finish this short film having a lot of selections and awards in international film festivals. When he came back to Spain, he produced the short films “Daniela” and “The farewell” in 2018. Currently, he is working in the distribution of these short films in national and internationals films festivals. He´s working too in some projects like “Ticket to Happiness” feature film Project, that´s being developed jointly with an English production film company, to be a co-production between London and Andalusian (Spain) and a new short film that he will shoot the next year. In the main time between projects and on his spare time, he works on his book “Sin love”, which tells the story of the first feature film the artist ever wrote and still could not get to shoot it. Along with his film producer works with commitment and perseverance so this and many other projects can see the light.