Today is the most important day in the lives of Suso and Ricard: after several years in a relationship they’re going to get married. Ricard comes from a Catalan family of rancid lineage; Suso, from a humble one in La Mancha. Both of their families are delighted with the marriage. Well, not all: Adela, Suso’s grandmother, will be present at the dinner, but unaware that what’s being celebrated is her grandson’s wedding day. 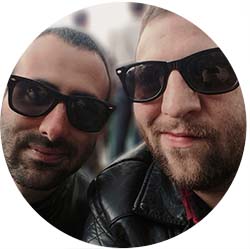 He was born in Tenerife (Spain) in 1989. In 2007 he moves to Madrid to work in cinema industry.This way, he studies the Bachelor’s degree en Journalism and Audiovisual Communication in Carlos III University of Madrid, and later a Master en Cinema and Television in the same university. Nowadays, he’s working as the production assistant of the TV program “Ninja Warrior” for Antena3, and he’s also been working as a part of the Direction Team in “El secreto de Puente Viejo”, a TV Serie, “Princesa de Hielo”, a short film produced by El Deseo, the film production company of Pedro Almodóvar, and a several advertising spots.

He was born in Madrid (Spain) in 1985. Due to his genuine vocation for working in film industry, he studies the Bachelor’s degree in Journalism and Audiovisual Communication in Carlos III University of Madrid. After several years of working in TV, he gets his specialization by studying a Master in Management of Film Industry. This experience takes him directly to work in the Communication Deparment of El Deseo, the film production company of Pedro Almodóvar. This way, he’s been working for them since 2012 till present, in the promotion of films like I’m so excited! (Pedro Almodóvar, 2013), Wild Tales (Damián Szifron, 2015), The clan (Pablo Trapero, 2016), Julieta (Pedro Almodóvar, 2016) and Zama (Lucrecia Martel).