Emil and Adam are two guys in their 20’s. They are close friends, and after a night at the movies, Emil is going to sleep over at Adam’s. Emil has unspoken feelings for Adam – feelings that are tested when they are sleeping in the same double bed. A film about friendship and the longing for something more. 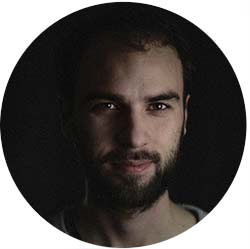 Jimi Vall Peterson is a director, screenwriter and editor based in Halmstad, Sweden. He is running the production company Färgfilm (Swedish for “colour film”) together with Johanna Andersson. His interest in film-making stems from a great love of cinema, going back to his early childhood. As a director, he is fascinated by the transformative power of film and the universal language of visual storytelling – telling personal stories about longing and fear. Jimi is currently developing the short film The Burning Man, which is set to shoot in 2019.