There’s much talk about the language of love — the beauty, the poesy, the intricacy and the eloquence. But what if the real romance rested between the lines, in pages and moments that pass you by? And what if you learned one day that you could read it all? Soak in the joy, taste the eloquence, breathe in the intricacies and feel the poesy reverberating in the air. But what if you could only sense, only feel and yet do nothing else? 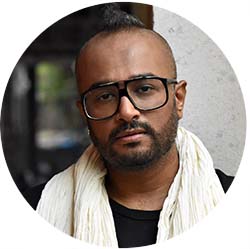 Faraz Arif Ansari started his film career as a co-writer with Mr. Amole Gupte (Writer & Creative Director of ‘Taare Zameen Par’ or ‘Stars on Earth’) Faraz was the Associate Director, Casting Director & Executive Producer on Fox Star’s ‘Stanley Ka Dabba’, released in May, 2011. He directed & choreographed a two hours concert with 500 children of Besant Montessori, Juhu which was used as the climax song of ‘Stanley Ka Dabba’ Faraz has been the Associate Director on many TVCs directed by Amole Gupte for major brans like Nestle Cadbury’s, etc. Faraz was the Associate Director & Casting Director on Karan Johar’s ‘Gippi!’ He choreographed many song sequences for the same film. He also worked as a Research Assistant & Associate Director on Deepa Bhatia’s internationally acclaimed documentary on farmers suicides called ‘Nero’s Guests’ Other than films & documentaries, Faraz has directed & choreography more than a 100 musicals for schools & colleges around India & the United States. Faraz has written the Story, Screenplay & Dialogues for an Indo-Pakistan Peace Project Short Feature Film called ‘Silvat’ that is produced by Zee Televisions under Zeal For Unity and is directed by Tanuja Chandra. He was also the Associate Director & Casting Director on ‘Silvat’ Faraz’s short film ‘Siberia’, premiered at the prestigious London Asian Film Festival, 2016 and has travelled over 30 international and national film festivals. It won the Best Actress Award at the Noida International Film Festival, The Top 10 Short Films at Colortape International Film Festival, Australia and recently, it was awarded with the Best Director (Jury’s Choice) at the prestigious Dada Saheb Phalke International Film Festival, New Delhi. Faraz has currently finished shooting a silent short film on homosexuality called SISAK (Probably India’s First Silent Short Film on the LGBT Community) Along with this, he has just finished directing a Promo & a Short Docu-Feature for India’s First Interactive Documentary Theatre Group called ‘Sounds of the Sufis’ Faraz is also the director of the live-show with the same name that has been staged across India and recently traveled to London to be staged at the Royal Albert Hall. Currently, Faraz has been roped in to direct a daily prime-time show for Star Plus called Shaadi Vaadi Ityaadi which is written by Faraz & Tanuja Chandra. He recently directed the Pilot Episode for the show. Right now, the pre-production for the same is in progress. When not working behind the camera, Faraz conducts cinema and theatre sessions for the underprivileged children across the slums in Mumbai and trains them to write screenplays and direct their own short films. Faraz has also worked with Aseema Charitable Trust along with Amole Gupte from 2009 to 2012 and has taught the children films, theatre and cinema appreciation. Faraz also runs a charitable initiative called ‘Gift A Meal’ which works at the grassroots level and provides meals to the street children across Mumbai & Delhi.