Unai and Sergio flirt with their friend Andrea in the soccer field where they train that afternoon until a joke unleashes the anger of one of the boys. From that moment nothing will ever be the same for either of them. 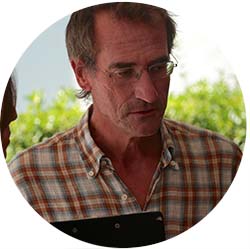 Pablo Malo started writing and directing short films among which were “El ángel de mármol” (1995) y “Jardines deshabitados” (2000) winners of some 20 awards at national and international festivals. “Frío sol de invierno” (2004) his first feature film, was selected by the San Sebastián Festival for its New Directors section and won the Goya for Best Director and 15 awards at international festivals. In 2007 he released the thriller “La sombra de nadie”, and in 2011 directed several episodes of the series, “Hispania”.  His last feature film “Lasa y zabala” (2015) was selected in the San Sebastian Festival into the official selection out of competition.