A child, son of a prostitute, is sold to the mother’s clients. In order to survive, seeking refuge in art, he becomes a transsexual artist. The short film talks about the life and emotions of Coco – alias Santiago Jimenez Barrios, a forty year old transsexual woman of Latin origin – her childhood, her trauma and her change. The protagonist, in fact, played by Antonia San Juan, dealing with a trauma, takes refuge in a universe made of colors, clothes and dance that will lead him to change into a transformist artist. 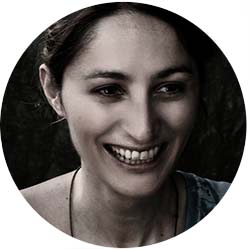 Economist and screenwriter. Educated in Assisi, where she graduated in 2005 in Tourism Economics, Veronica Succi pursued her career in international hotels around Europe, until she went to Madrid, where she earned a Master Degree in International Hospitality Management. Succi spent several months in Netherlands, Spain and Italy to do researches and, in 2011,she wrote the full-length movie titled Parvus, about the international paedophile organizations. Shortly after, in 2012, Succi worked as a screenwriter for a short film titled Antonio e Fellini, produced by Andrea Salomon and in 2013 she adapted the script for Meter Onlus association (against paedophilia) national tv spot, commissioned by Father Fortunato Di Noto. In 2013 she also founded Efesto Film production with Andrea Salomon and Michele Catania. By January 2014 she wrote, directed and produced the documentary Niños Maya, entirely shot in Guatemala. In april 2014 she writes, directs and produces another tv spot against paedophilia for Meter Onlus association, commissioned once again by Father Fortunato Di Noto. In 2018 she wrote, directed and produced the Shortfilm entitled “Coco”, ultimated in 2017.