Featuring young trans actors in trans roles, ‘Listen’ honestly and frankly depicts some of the myriad struggles experienced daily by trans children and teenagers, giving a much needed voice to this often maligned section of the community. 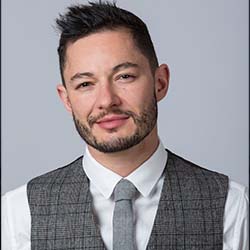 Jake Graf is a director, writer and actor based in London known for Dawn (2016), Chance (2015), The Danish Girl (2015), Colette (2018) and Dusk (2017). Jake is an active and visible member of the transgender community, speaking internationally on trans issues, particularly in relation to film and media. He is an ambassador for the British LGBT Awards, and was also involved in Stonewall’s successful campaign to include the transgender community in their political lobbying and campaigning. Jake also aims to make change through the medium of film, and his first film, XWHY, which he wrote, directed, produced and starred in, was nominated for The Iris Prize. He used his own transition to depict the physical changes of the fictional transman in the film, which was a first, and garnered much critical praise. Brace, his second screenplay, deals with issues of homophobia, gang violence, gender identity and self-acceptance. Both Brace and XWHY have been used as educational tools in universities, media events, and hospitals UK wide. His third film, Chance was one of 5 films selected to take part in the British Film Council’s pioneering project #FiveFilms4Freedom, in association with the BFI, to promote tolerance and understanding worldwide. His fourth short ‘Dawn’ touched on themes of disability and transphobia, won multiple Best Short Film awards and was released on Peccadillo Pictures’ latest Boys On Film DVD, the only film in the collection with a female lead. Jake’s latest film ‘Dusk’, starring Duncan James and Elliott Sailors, won 30 Best Short Film awards. He has just written and starred in 8 part LGBT web series ‘Spectrum’, stars in drama series ‘Different For Girls’, and is currently writing his second feature film screenplay.

Tags:ShortTransUK
PreviousThe Serenade
Next Megg – The Margin Who Migrate To The Center